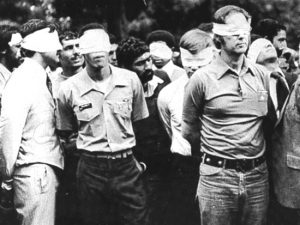 My home country has been taking as hostage. This is not a new incident. Thirty years has gone by without any real acknowledgment of this invasion. The safety of the world was endangered just because of this silent invasion of my home country. No one cared and no one noticed, but us. We had no voice then and we still don’t. However we will not let go.

The invasion occurred by those who said they were sent by god. They changed the notion of religion forever, at least for us Iranians. They have been persistent in creating misery. Our free will is in prison; at least it has been there past thirty years. Every time we opposed they tighten the ropes of control on our necks. We got scared of claiming our rights. We chocked due to the chaos.

Iran as a country has been taken hostage by people who are against happiness and joy. Millions of us had to relocate, flee, leave, and disconnect due to the level of fear these people created. Millions of us became victims of this hostile hostage taking inside our home country. A few circle of applauding supporters have got the best deal in this invasion. The rest of the nation is on its own. How about is the psychological damage to these victims? Well, many books are to be written in addition to few words that has been said by now. The damage is not known yet. Generations to come will wonder what happened.

What these hostage takers wanted? They demanded us to replace our home country for a hallucinated ideology, our culture for illusions, and our life for melancholy. Partly they have succeeded. Partly we Iranian, although we are hurt and impacted badly, still we cannot and will not let go.

Hostage taking of our home country did not occur only in a physical format. The unfolding events during past thirty years resulted to the psychological and political invasion of people’s homes, minds, and beliefs.

They took control over our lives in zero time. We were dis empowered in no time. Hostage takers got us all in their net, one by one. This was what they wanted.

Just to refresh our minds, we can look at the Personality traits and character of hostage takers. They are usually hostile, violent, hateful, inflexible, rigid, dangerous, out of control, and inappropriate.

The hostage takers use variety of methods to get what they want.

They start with threatening, intimidating, creating crisis, requesting submission, and acting violent, all and all in order to get the power over their victims.

The private logic of hostage takers is that if they get what they want, then they are no longer losers. They will overcome their own feeling of inferiority. They will compensate for what they do not have, knowledge, sophistication, and compassion.

Victim rights are never ever the concern of the hostage takers, why should it be?

Some more conscientious hostage takers promise to set victims free if and when they get the ransoms they are seeking. However, promises could be only worthless words and gestures. Gaining power and attention is the main concept when someone or a group of people act as the owner of the victims. This is what we Iranian experience, clearly.

These wild people would only hurt us more if we believe them. Promises of the hostage takers of my home country were never real and will not be believed. Question is when and under what circumstances these hostage takers or better say criminals will give up this crazy act. The problem is that they have nowhere to go. We Iranian are doomed to negotiate with our hostage takers, to let them to keep the change of billions they have already received as ransoms, and to ask them to leave us alone. How would this be done as peaceful as possible? Well, I do not know.

Note: This article was originally written and published in EzineArticles June 9, 2008 by this author.