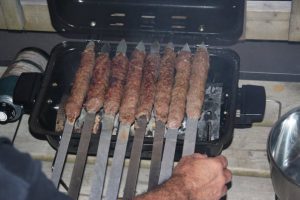 Our Global Identity and Culture of Migration. What is that?

Some of us have moved around the globe, yet, we are missing something.  Some of us are always in move, from continent to continent, country to country, and city to city.  We have not found our global identity yet.  We Iranian live around the world now. Our lives are influenced by this Diaspora life style we have all been accustomed to.
This new style of life has changed our world views forever.  In the good old years, mothers and families made a big deal when their daughter or son would attend university in another city than the home town!  It was considered to be too far! If a girl was going to marry a man from another town, it was also a big deal. Mothers use to say; we do not give our daughters to strangers.
Life in “gorbat”or “a strange / unknown place was considered to be damaging and dangerous.  Mothers use to say “gorbat” is hard!
We called it going to a stranger city or which was the unknown type of life for us.  The Iranian literature uses this concept in many places, creates a structure for the concept of “gorbat” in relation to the pain and suffering it causes.
Rumi, Hafez, Saadi and our contemporary poets use this topic of “gorbat” which is an embodied experience and a hard reality for many families and individuals today.  Migration causes that “gorbat” to become an internal reality of many people’s life while having an external function and social structure.

It is interesting that everywhere we live in; we always refer to the host countries citizen as “strangers” or “foreigners.” These are the terms we kept from the time going to strange / foreign countries was very unknown and European or American people coming to our home country were coming from outside so they were “foreigners and unknown to us.”  Now we are the one who are foreigners in these countries we have chosen to live or we have been given chance to live in!
May be this is the reason for our ability to adjust very quickly in the societies we enter in.  We call ourselves as insiders and the others as the outsider/ foreigner/ strangers, referring to people from outside of our geographical space and also psychological borders.

We have a Diaspora life and culture. The positive aspects of this Diaspora are how we have learned about various cultures all over the world.

Diaspora is refereed to any group of people or ethnic groups who are forced to leave their home countries.  Middle East people are a good example here. People from those areas all have been forced to try the bitter taste of migration when no choices have been offered. Yet, many families choose to migrate because of the unstable socio-political situations in the home countries.
In every family (with the Midwestern definition) you will find members living in at least 4-5 different countries. A mother here in Canada, son in Denmark, parents here and children in the state, an aunt in Germany and an uncle in England, one cousin in Sweden, and another cousin in France.

It is interesting to see the family interactions when they live in different parts of the world, yet try to get together. Some people prefer a not teaching their children the mother language.  Some other parents work hard that children attend some Persian language courses. Children may have hard times to interact with cousins who live in other cultures, other countries, and speak other languages.  That is a show sometimes to see two cousins with Iranian parents, when children speak only the spoken language in the host country.

It is time to write and document the multifaceted experiences of this Diaspora.  Our next generations would have hard time to understand why this happened and how to resolve identity crisis!
What is your experience like?