Skip to content
August 18, 2009 by Poran Poregbal Resistance to Change 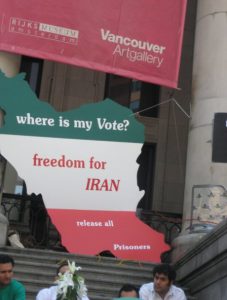 We Iranians are pushed into a seriously depressing and anxiety provoking situation.  Past couple of weeks of May 2009, millions of our people cheered for a seemingly peaceful and secular election. We managed to argue for change in order to ask for an active participation in this election of presidency in Iran.

On June 12, 2009, Thousands of us who had let go of practicing our rights to vote, broke the cycle of indifference and went to the polling stations every where they lived.  People voted for reform instead of stagnation, life instead of death, and hope instead of violation of human rights in Iran.  In this process people invested their emotional, physical, and spiritual health into working for change of a president who seems to be willing to put the whole world into fire just to boost his insecure yet self-righteous mind.  Young people in Iran who had before lost hope for a human, trust able, and dignified life worked hard to get their friends and families to vote for reform.

Level of excitement, joy, happiness, fellowship, and recognition of democracy made these peaceful people go out, stay in lines, and vote for the candidate they believed would be able to move Iran beyond it’s capacity for change. Soon however, all these emotional investment showed to turned into anger, disbelief, shock, loss, fear, hopelessness, and anxiety.

Those in the Iranian government who are clearly against change and happiness for Iran managed to find ways in which they could switch all the ballots for a  president who had shown his anti-social personality in the past four years.  Lies and deception became to impact our individuals health and wholeness.

Millions of votes became useless and worthless while this belligerent regime of Iran used the old ways of silencing people.  All the ways of communicating with the outside world was stopped and a coup took place. This way of fighting against people’s will and votes has now caused a national grieving for this dark retrogression. Our Iranian mental health is once more time challenged to the maximum and in an intricate path.  At this point the level of sadness and frustration among many of us Iranians are overwhelming.  Now we may remain positive and think of either a miracle or a peaceful solution for justice.  Is that possible?